Michael Pettis recently posted an interesting piece on the Shanghai market.  He makes the following points.

After giving many examples of how the Shanghai market trades on non-economic information, he concludes:

“A market driven almost exclusively by speculators, and with little to no participation by fundamental or value investors, is not a market that pays much attention to long-term growth prospects.  It is driven largely by fads, technical factors, liquidity shifts, and government signaling.

So what does this year’s crash in the Shanghai stock market tell us?  It might be saying something about the impact of the European crisis on export earnings.  It might suggest that liquidity in the system is being driven into real estate rather than into stocks.  It may reflect contagion and nervousness about the fall of stock markets abroad.

But we should be cautious about reading too much into it.  In fact attempts by Beijing to hammer down real estate bubbles in the primary cities without addressing underlying liquidity expansion may simply push asset price bubbles elsewhere, and this could easily cause a surge in the Shanghai stock markets.  But this should not then be interpreted as signaling a surge in the economy.

Shanghai’s markets will go up and down, but they are not driven by investor evaluation of long-term growth prospects.  China does not yet posses the tools to make such evaluation useful, so be careful about reading too much into the stock market numbers.”

This does not mean that the Shanghai composite is useless. It means that it is a combined measure of liquidity and government intervention.  If the fund managers who speculate on government policy or liquidity are successful in making money, then the market is giving useful information. The information may be slightly different from other markets (although even developed world markets are more focused on the next few quarterly earnings than on growth prospects 5 to 10 ears out), but it is still important.  It is particularly important for those who think that China’s recent growth during the downturn is unsustainable because it is built on real estate speculation and government spending without a clear way to transition back to a more normal convergence style growth. A sharp fall in equity prices is one of the indicators of a tighter monetary policy (or that a tighter monetary policy is finally having an impact), and further extreme moves could be signs of an actual deflationary unwind. Any stock market move has many causes, but it definitely gives us useful information. 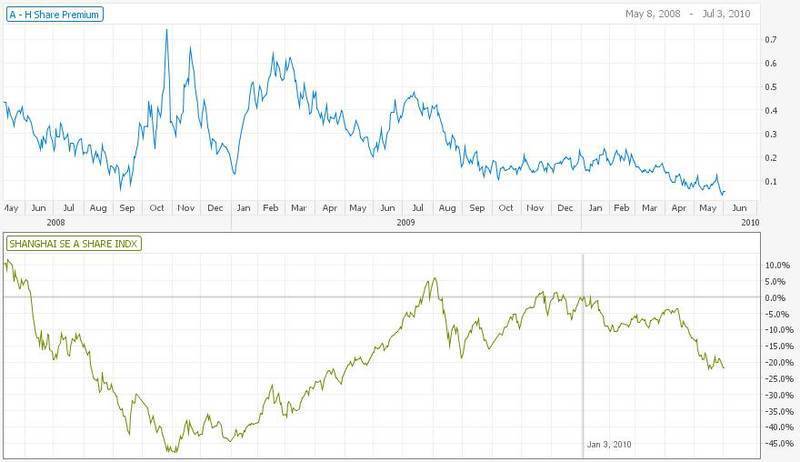 A – H share premium on top, Shanghai A Shares normalized to Jan 3rd, 2010 on bottom. The premium of the Shanghai A shares over the foreign traded H shares is another measure of the relative excess liquidity in China’s market compared to the rest of the world. Source: Palantir.