A paper on the Chinese housing market (See FT, econbrowser, MR for more details) highlights that its market has gone up almost 800% since 2003 Q1. In contrast, the Shanghai A share market and Chinese real GDP are both up about 90% since Q1 2003.

While the paper highlights a potential bubble, What is more interesting to me is from the chart the FT takes from the paper.  They find that the market is being taken over by Central State Owned Enterprises (SOEs).  These SOE developers have been driving up the price of the housing market, paying on average 27% more for similar properties. 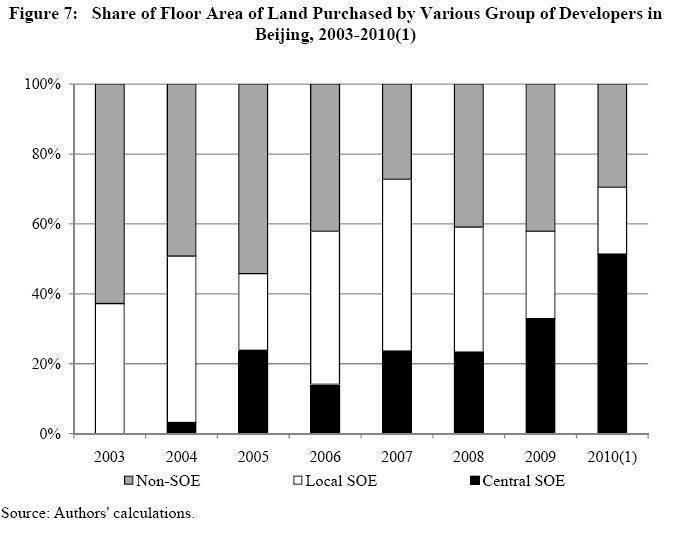 It is worrisome to see SOEs start to dominate an economy that was growing precisely because they had reduced the impact of SOEs in their economy. A large part of their convergence growth can be attributed to their switch from a communist towards a neoliberal system. A good rule of thumb is that the smaller the impact of SOEs, the richer the area. The trend of decreasing SOE employment has been a positive driver of China’s economy since the Asian crisis in 1998*.

In China’s response to the crisis, workers at state owned enterprises have stabilized and even increased slightly from its bottom in 2008.

During an economic downturn, it makes sense that the transition from SOEs towards the private sector would slow down. However, if there is a crisis and a resurgence of SOEs, then that could be one more reason to be worried about China’s long term future.

*The causation can also be said to go the other way, as decrease in SOEs is also due to China’s liberalization of the economy which allowed private companies to force SOE’s to privatize or be uncompetitive.