With the election over and Donald Trump's team taking control of the administration, one government agency that people on the right should be worried about is the Federal Reserve. This is an independent institution that is capable of destroying the GOP in the midterms, it can make the reelection of Donald Trump in 2020 very difficult. The irony is that many conservatives, even those who are supportive of both Trump and the GOP, are concerned about the Fed for the wrong reasons and would like to push the Federal Reserve towards policies that will result in electoral losses for Trump and the Republican Party.
Conservatives have historically preferred tighter monetary policy than liberals. Looser monetary policy, in the form of lower interest rates and higher credit creation, can look helpful in the short term while leading to harm in the longer run. The long run harm can be the capital misallocation predicted by Austrian business cycle theory and other theories. It could be the higher probability, however miniscule, that the central bank will eventually be used to monetize debt and spur hyperinflation. Or might just be the simple risk of inflation expectations among the public suddenly becoming unanchored, leading to a return of 1970's style stagflation.
Worries about too loose monetary policies are often well founded, particularly when inflation is getting out of control. But our current environment is one in which inflation has remained subdued for many years. The Personal Consumption Index Price Index remains well below the Fed's target of 2%.

The 5 Year, 5 Year Forward Inflation Expectation Rate is hovering around 2%. The CPI has recently been slightly higher than the PCE price index, so the market is still forecasting that inflation will be below the Federal Reserve's target.
The Federal Reserve has recently started to act more boldly in hiking rates to normalize monetary policy. It is worrisome that they are acting on forecasts that have been consistently wrong in the same direction. Looking at their end of the year December projections for GDP growth, they have had to continually revise down their growth estimates throughout this cycle. 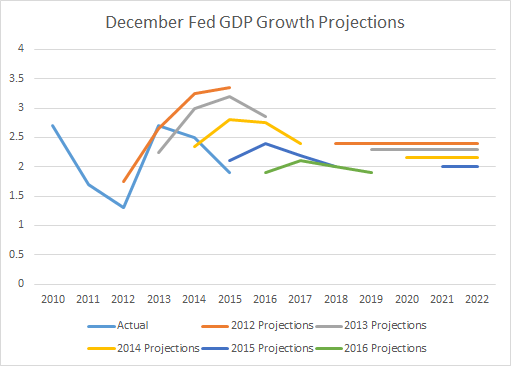 They are acting before there is any real inflation and without strong evidence that this time their forecasts of renewed growth and inflation are correct after being wrong for so long.
The Federal Reserve is tightening policy more than other countries around the world, which has led to a very strong dollar. The US trade weighted dollar index is the strongest it's been in 10 years.
Many economists are already concerned that programs which encourage exports while discouraging imports will strengthen the dollar and counter some of their potential impact. When we combine that with an aggressive Federal Reserve, the impact of positive steps taken to boost exports can be significantly countered by a strengthening currency.

And tight monetary policy doesn't just strengthen the dollar, it can hasten a cyclical downturn that turns people against the party in control of government. In the early 90's, George H.W. Bush lost for many reasons. But he would not have been vulnerable if the Federal Reserve wasn't hiking rates into his re-election campaign. Perhaps more significant was what was happened in Argentina, where market friendly economic reforms of the 90's were reversed after conservatives drove their country into a depression caused by the Peso's peg to a strengthening dollar through the late 90's and early 00's. They could have unpegged the peso at any time, but they were too busy fighting the last battle against hyperinflation to implement a more reasonable monetary policy.
Trump has mentioned previously that he wants to get rid of the low interest rate environment. If he appoints nominees who are too quick to move in that direction, raising rates before growth and inflation warrant action, it could counteract any economic growth generated by his supply side reforms in the short and medium run. And if that causes electoral losses, the reforms themselves could be reversed and no long run benefit will exist either. As Scott Sumner has said, monetary policy is the Achilles heel of the right.