There are certain ideas that are politically incorrect as well as too simple for it to be a respected opinion.  A great example of an idea that is true and that people don’t like to think about is that one of the biggest reasons for crime's decline is more people in prison.

In his book why crime rates fell, Tufts University sociologist John Conklin concluded that up to half of the improvement was due to a single factor: more people in prison. The U.S. prison population grew by more than half a million during the 1990s and continued to grow, although more slowly, in the next decade. Go back half a century: as sentencing became more lenient in the 1960s and '70s, the crime rate started to rise. When lawmakers responded to the crime wave by building prisons and mandating tough sentences, the number of prisoners increased and the number of crimes fell.

Common sense, you might think. But this is not a popular conclusion among criminologists, according to Conklin. "There is a tendency, perhaps for ideological reasons, not to want to see the connection," he says. Incarceration is to crime what amputation is to gangrene--it can work, but a humane physician would rather find a way to prevent wounds and cure infections before the saw is necessary. Prison is expensive, demoralizing and deadening. "Increased sentencing in some communities has removed entire generations of young men" from some minority communities, says San Francisco police chief George Gascón. "Has that been a factor in lowering crime? I think it probably has. I think it also probably has had a detrimental effect on those communities."

Contrast this with the treatment generally gets in intellectual circles. Malcolm Gladwell prefers to focus on how tipping point type policies decreased crime in New York and Steven Levitt is willing to be politically incorrect with his abortion theory, as long as he is being politically incorrect in an impressively roundabout manner. The prisoners per capita coefficient in Levitt and Donohue’s paper was larger for property crime and murder, with subsequent research shower that it and not the abortion measure maintained its significance when per capita crime instead of total crime was measured.  This type of straightforward analysis of “More people likely to commit crimes in prison means less crime is committed” doesn't get much play in the popular press because being both politically incorrect and simple; it isn't a very high status point of view. The only time the idea gets play is when the prison population needs to be reduced and citizens worry what this might mean for crime.
Recognizing a fact is not the same thing as applauding all of its implications.  The drug war, which is in large part responsible for the increase in prisoners, is also responsible for a large increase in drug related property and violent crime.

One of the basic ideas in finance is that if something is widely known, then it is already priced in by the market. This leads to the contrarian style of investing, as pictured below: 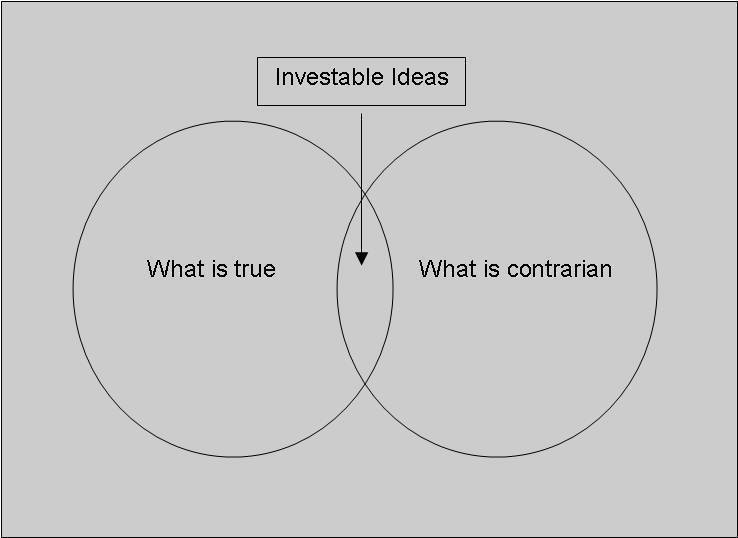 If an idea isn’t believed by the market, then taking a position against the market view generally leads to a better risk/reward pay off because the idea can’t be priced out of the market when it is already priced in.  Of course, it is often very difficult to determine what market positions are contrarian because figuring out why the market is moving outside of earnings announcements, economic data and changes in government policy is a full time job in itself.

One way to clarify this is to focus on what people don’t like thinking about. 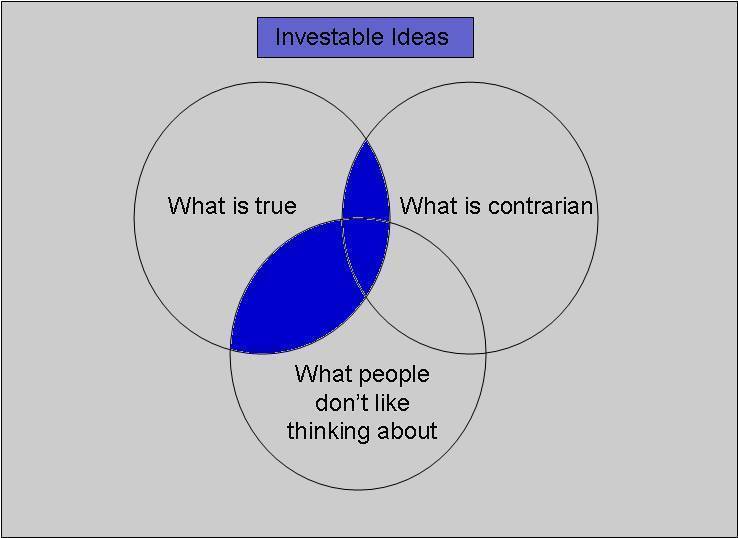 Trading based on what people don’t like thinking about can consist of taking the long term point of view, or just the politically incorrect point of view. An example of a politically incorrect view is that of vice stocks, stocks in industries that could be considered questionable. These types of stocks outperformed the S&P up until the start of 2008, by which time the idea that investing in vice outperforms could be said to no longer be contrarian.

Another area that investors avoid is the long term.  Investors may acknowledge long term trends are important but their incentives are short term. They are paid and allocated capital based on yearly performance. This leads to a focus on the short term, where earnings reports and economic data more than a year away are seen as insignificant. This is partially why the value based investor strategy works (in the sense that value stocks have consistently outperformed growth stocks in many basic quant models) – if a company is cheap relative to its price then the investor will make money in the long term despite the lack of a positive story in the short term. Of course, sometimes the stock is cheap because it has a negative story in the short term, so the value stock is also a contrarian idea.