Net neutrality is not something people who prefer a free market economy would support apriori. It goes against the idea that businesses should be able to compete how they see fit. If a business wanted to lay fiber and give away cheap internet on the condition that their social network, streaming service or Amazon referral links are used, then in theory that should be okay. But we don’t have a competitive open market with many different players. The internet service providers have relationships with municipality governments that help them deploy fiber to their residents. Sometimes the municipality keeps the ISP’s competitors out due to relationships between local officials and ISP lobbyists, other times it is due to bureaucratic indifference or incompetence. It takes a concentrated effort to avoid the accumulation of cumbersome rules and regulations that cause the high costs and slow deployment times that will keep ISPs out of an area that already has a competing provider. Either way, ISPs often achieve monopoly power over their local markets. A 2013 report from the US Department of Commerce shows very oligopolistic competition at best for providers at speeds over 25 Mpbs, and almost no competition above 100 Mbps. 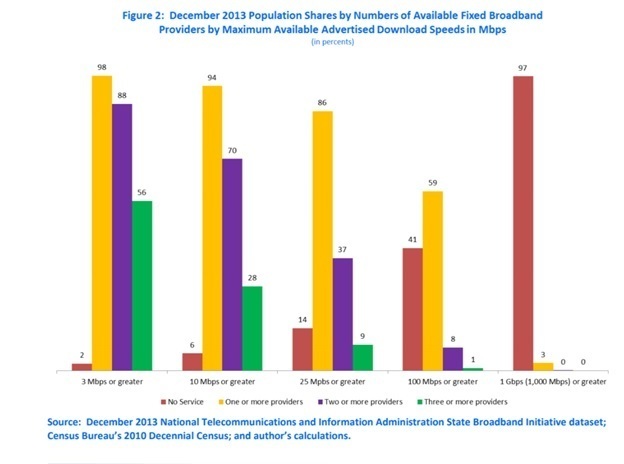 Given time and an incentive to increase their revenue quarter after quarter, companies will attempt to extract additional rents from their position as the gatekeeper consumers and online businesses. Net neutrality rules force ISPs to act as dumb pipes to the internet will prevent these local monopolies from using their government-backed power to pick winners and losers on the rest of the internet.  In our status quo of regional internet service provider monopolies and oligopolies, some form of net neutrality is a desirable compromise.

The 2015 Title II Order by the FCC which was an implementation of net neutrality in the United States is seen by many as a regulatory overreach. It wasn’t because their general framework was that far off, but it was quite a stretch to independently label ISPs as public utilities under authority used to regulate telephone monopolies in the 1930s. This type of significant rule change without congressional input is worrisome for those who want the responsibility of lawmaking to fall upon an elected legislative body. We shouldn’t look to the FCC to implement these rules on their own, the rules should be spelled out by a congress that is concerned with protecting interstate commerce from companies who are empowered by barriers to entry put up by local governments.

One thing that might get lost in this process is the implementation of internet service providers with unique business models. It would be best if room for experimentation was left open in areas where there is already significant competition between multiple providers at high speeds. Then we might see if consumers will be willing to forgo their dumb pipe options in return for a lower cost service. This is the last thing that major tech incumbents want. This approach might allow emerging tech companies buy their way into customer scale, or it might force to major tech companies to spend more to entrench their positions. Either way, the ISPs might be able to figure out ways to make a little more profit while their customers find additional consumer surplus. The key is that the ISP is trying out these innovative business plans in scenarios where the consumer has other reasonable options.