The investment commentaries from Bill Gross are always interesting and worth reading. This month’s investment outlook focuses on the greater public indebtedness that follows financial crisis and the relative abilities of the respective governments to absorb this increase in debt.

These examples tend to confirm that banking crises are followed by a deleveraging of the private sector accompanied by a substitution and escalation of government debt, which in turn slows economic growth and (PIMCO’s thesis) lowers returns on investment and financial assets. The most vulnerable countries in 2010 are shown in PIMCO’s chart “The Ring of Fire.” These red zone countries are ones with the potential for public debt to exceed 90% of GDP within a few years’ time, which would slow GDP by 1% or more. The yellow and green areas are considered to be the most conservative and potentially most solvent, with the potential for higher growth.

They then show the following chart:

This chart uses gross data for debt, while the net debt is a much better indicator of their ability to service debt. The rich man who has debt equal to his annual income is not said to be poor if he also owns enough assets. He may have to sell some of those assets to make good on his debts, but the debt holder should be much more worried about the man who is deep in debt without off setting assets.  The underlying structural deficit is used instead of the public sector debt to give us a better idea of whether a country is paying for past mistakes (already measured in net financial liabilities) or its current mistakes. The chart below uses 2010 projections from OECD Economic Outlook No. 86, with adjustments to Greece’s data.

Under net analysis, a few things stand out. Norway’s position is much better than any other country, especially when considering that their financial balance on the year is actually positive when petroleum activities are included.  Italy also looks like it is at least in the process of getting its house in order as they already have a underling structural surplus. Though still in the danger zone, Japan’s net debt position isn’t nearly as bad as its gross debt first appears.

The BIS presentation mentioned yesterday contains a chart on slide 7 which shows that Italy, France and Japan have policies that limit the fiscal impact of their aging population compared to other countries. 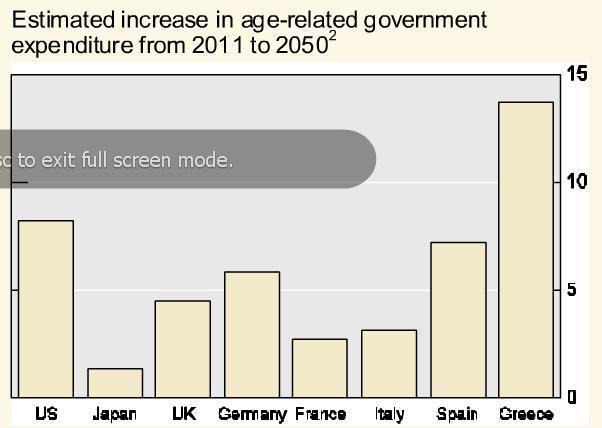 Net or gross, either approach is better than an investor believing that the efficient market will take care of things and all developed countries should be viewed equally from an asset allocation perspective.