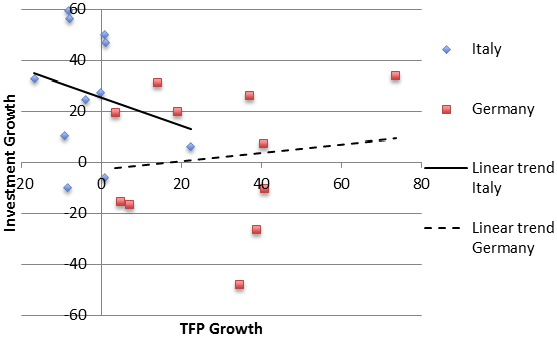 In this chart, Italy's manufacturing sectoral investments are contrasted with Germany's. In Germany, many of the sectors seeing higher productivity growth often receive more investment. Not all sectors require additional investment just because their productivity is rising. Competitors outside the country might outcompete local producers even when productivity is improving or rising productivity might mean that the total demand for the product is taken care of by current producers. But it's instructive to note that there is widespread acceptance that Germany is the healthy economy while Italy is quite unhealthy.

This misallocation of capital is correlated to Italy's inability to incorporate information and communications technology into their businesses the way the United States and other countries have done over the past few decades. Inefficient management practices, such as a focus on tenure and equality over performance based metrics, which have been found to hinder technological adaptation, are more common in Italy than in comparable Eurozone countries.
But this ineffective economy also provides a great answer to those who wonder why capital allocation is important in the first place. When the normal capital allocation process breaks down we will see scenarios like the above chart, magnified significantly. The capital allocation process can break down for many reasons, ranging from group think and herd behavior to government regulations favoring the less productive sectors.  But in either case, it will generate a scenario like the above chart where less efficient sectors are getting unproductive investments at the expense of more productive sectors.