I decided to apply the Robin Hanson theory of health care spending, that on the margin it is wasted, to compare the United States GDP to that of other countries.  Luckily, there is easy access to data on PPP adjusted per capita health care dollars from the OECD on Wikipedia. I compared the US 2007 GDP to the twenty richest OECD countries*, adjusted and unadjusted for healthcare spending. 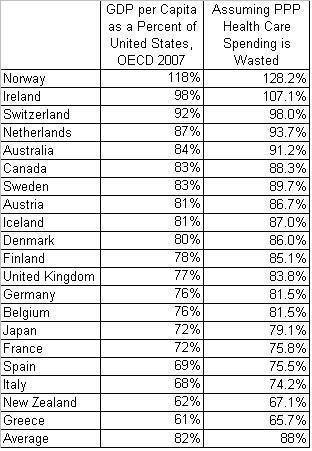 So on this measure, the United States is not as far ahead of other countries as people think. Using 2009 IMF data, Switzerland actually has a higher PPP adjusted GDP assuming that each country’s health care expenditure is of similar utility.  Singapore does far better than most countries at holding down expenses and is already richer on a PPP per capita basis, so it looks even better by this comparison.  If the CBO forecasts about the nature of GDP growth are right, the US’s semi-wasteful spending on health care is only going to be more significant going forward.

*I excluded Luxembourg and for Japan health care spending I used the 2006 WHO numbers.