In the wake of the Twitter IPO announcement, Tyler Cowen asks if the return to public equities is now lower. His theory, about a wealthier world that causes successful companies to stay private for longer seems flawed but he brings up an interesting question.

More recently, Linked-in went public in 2011 for $4.5 billion and Facebook went public in 2012 for $90 billion. With Facebook now comfortably above its IPO price, Twitter is planning on going public with analysts estimating its IPO market capitalization between $10 and $20 billion dollars.

There are many differences between the world that spawned the Microsoft IPO and today’s markets, but the below might be the most important:

2. With many companies putting off going public a new financial ecosystem developed to fund these companies. Late stage VC firms like Andreessen Horowitz entered into the market. Not only do they have billions of dollars they need to deploy but they actively help the companies they invest in. This further raises the opportunity cost for companies thinking about going to the public markets.

3. A growing secondary market in shares of startups lets many founders and early employees diversify a significant amount of their new worth out of the company. When these employers feel financially secure this reduces the incentive for an immediate IPO.

4. With the internet and globalization, network effects are much more important and markets are much more likely to be winner take all. Once the winners are established their market capitalization will be significantly higher than companies in the past. This doesn't stop companies from going public sooner by itself, but it does mean that by the time the company feels that it is stable enough to be traded on the public markets its market capitalization will be much higher.

Given all of these factors, the higher market capitalization of IPOs makes a lot of sense. What this means for public equity returns is more complicated.

The first factor prevents many companies from going public until they are much more successful. This includes companies that go on to be successes but there are also companies that end up as failures or frauds that would be detected by tougher accounting laws that public market investors are never exposed to. Small companies will also often sell themselves to larger companies rather than enter the public markets. Overall it is difficult to calculate the direct effect of this factor on public market returns.

The factor that really penalizes public market investors is that a healthy secondary market means there are not as many situations where a company will go to market merely for the sake of allowing its management team to cash out. When there is demand for liquidity, the people on the side of the trade giving liquidity will on average make a higher return. The reduction of this factor could lower returns for public market investors in general. At the very least it should cause a reduction in the size premium. And from the chart below, we see that size was never a particularly attractive risk premium to be long in the first place.  Momentum, market return, value and even the risk free rate have outperformed the classical size risk premium factor. 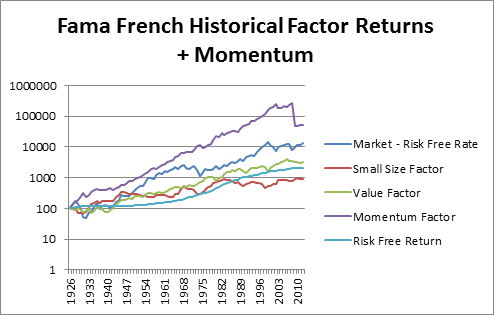 The winner takes all (most) nature of many of markets today is both a blessing and a curse for public equity investors.  It isn’t always private companies like Facebook or Twitter who create new markets, as Apple investors from the early 2000s know very well. At the same time, other public companies, Microsoft is an example that comes to mind, will often spend billions of dollars trying to be the winner in a new market but fail miserably.  And if companies really are sustainable pseudo-monopolies, then public market investors have a chance of benefiting from investing in them even after IPOs.

When thinking about what impacts public market returns it is fun to think about things like the impact of mega IPOs will be but it is better to double check theory again the basic fundamentals. We currently have an equity market that is yielding over 6% while investment grade debt yields, depressed by quantitative easing and low rate expectations, are below 4%. Until the past few years, investors in bonds have been paid a premium over earnings yield because they are taking on inflation risk and their earnings will not go up. The last time this happened we have to go back to a time period when equities were viewed as a realm for uncouth gamblers and everyone knew that railroad bonds were the key way to keep their money safe. 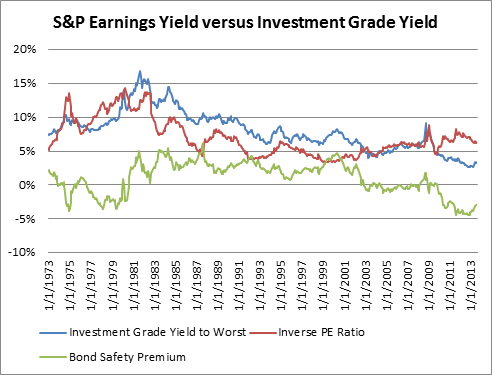 Given the current valuation dynamics, it isn’t likely that the average return on publicly-held companies has moved lower.